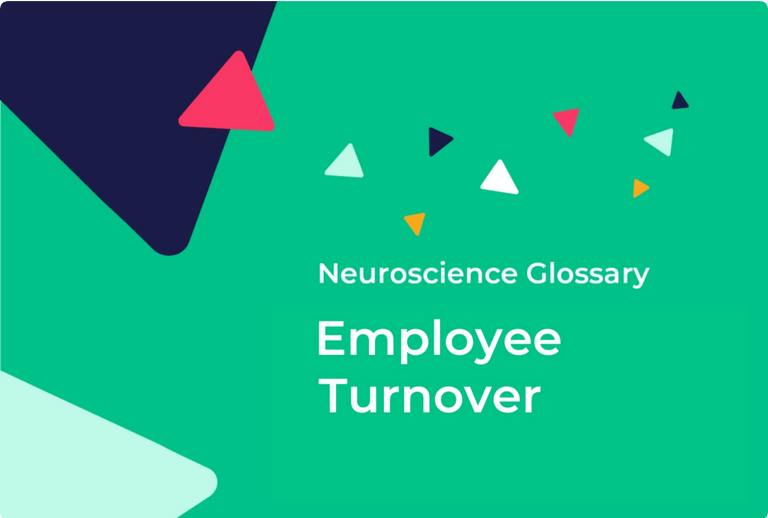 What is employee turnover?

The CIPD’s definition of turnover is “the proportion of employees who leave an organisation over a set period”. It’s often represented as a percentage of the total workforce. Here’s how it’s calculated (it’s pretty simple):

As you can probably tell, this is quite a crude measure as it’ll often include retirees and redundancies, which are generally planned for. The type of turnover that tends to impact employers most is voluntary turnover – that is, resignations. For that reason, most employers will calculate their voluntary turnover rate separately.

Explaining the different types of turnover:

Voluntary turnover refers to the proportion of employees who actively choose to leave your company by resigning in a certain time period.

Involuntary turnover refers to the proportion of planned departures from your workforce in a set period. This includes retirees, redundancies and terminations.

Why is workplace turnover important?

There are quite a few reasons why it’s important to keep an eye on turnover, especially voluntary turnover:

As you’ll already know, hiring comes with its costs. And if you’re constantly having to replace people you hired less than a year ago, those costs can skyrocket.

Remember, the average cost to hire in the UK is about £3,000 (per Glassdoor), although other estimates also stretch far higher – especially for more senior employees.

That means high voluntary turnover has a direct, negative impact on your company’s bottom line.

When your teams are constantly chopping and changing, it’ll often affect remaining team members’ experience. The “revolving door” can lead to lower motivation and satisfaction, and can also encourage your current employees to similarly look for opportunities elsewhere. In this way, voluntary turnover can become a bit of a vicious cycle.

Of course, the opposite is also true! High retention rates lift morale, increase engagement, and create a platform for your culture to blossom.

High involuntary turnover doesn’t just affect your existing employees. It can also make it harder to get great talent through the door, mostly for the same reasons. Most people won’t want to join an unstable team that’s constantly changing because of high turnover.

A stable team with established ways of working won’t have these frequent challenges, so they’ll often be more productive.

What is a healthy turnover rate?

This is where things get a bit more complex. That’s because turnover often varies by the industry you’re in, but also across different roles. For example, we often see high voluntary turnover in call centre roles, where employees can quickly get stressed or burnt out.

There are some benchmarks, though. Most resources suggest aiming for 10% as a goal, with most companies realistically falling between 12-20%. However, getting more granular data on your individual departments will also be helpful! It’ll also be helpful to understand whether your industry has a particularly high turnover rate – like hospitality, or retail. If you, you may want to revise your benchmarks a touch.

There are various causes for high turnover, but one of the biggest is making unsuitable hires in the first place. If you’re looking for stable, successful teams, then one of the best ways to guarantee it is to measure what truly matters from the get-go. With tools like our assessment at Arctic Shores, you’re able to see more in people. And with that added insight, you’re ready to see who’ll fit your teams like a glove – and who won’t.

Measuring role fit with our assessment

One driver of turnover is that people don’t take to the role. Often, roles simply don’t align with candidates’ natural strengths – no matter how well-suited they seem on a CV, or in an interview. This makes burnout more likely, and turnover almost inevitable.

Take, for example, our work with AXA.

Their UK call centres were wrangling with turnover of over 30% last year, which was impacting their customers’ experience. We worked with them to uncover the crucial behaviours for success in the role, and what stood out was emotional stability – something they’ve previously never been able to measure. Their staff were struggling with the emotional weight of customers’ insurance claims, leading to burnout and high turnover.

But, with our take on psychometric assessment, they could finally hire with that in mind, measuring candidates’ emotional stability alongside other traits like resilience. By finally seeing more, AXA cut turnover by 18%, and saved £2.5m in turnover costs in a single year.

Measuring cultural alignment with our assessment

Another reason for turnover can be cultural fit – increasingly important for candidates today. In fact, a 2019 Glassdoor survey found that 77% of candidates research an employer’s culture before applying.

But how do you know they’ll be a good cultural fit before they join? The answer, again, is seeing more. All by measuring natural behaviours in action.
With our behaviour based assessment, you can easily screen against your core values. Again, take AXA. They incorporated their four key values into what we call a Fit Profile – a picture of what ‘good’ looks like. This way, they didn’t just screen for role fit, but cultural alignment too, which also contributed to the decreased turnover. But, what’s more, it also meant new hires were more engaged, took 41% fewer sick days, and were more likely to be promoted.