Data science in talent acquisition: The questions you’ll be glad you asked 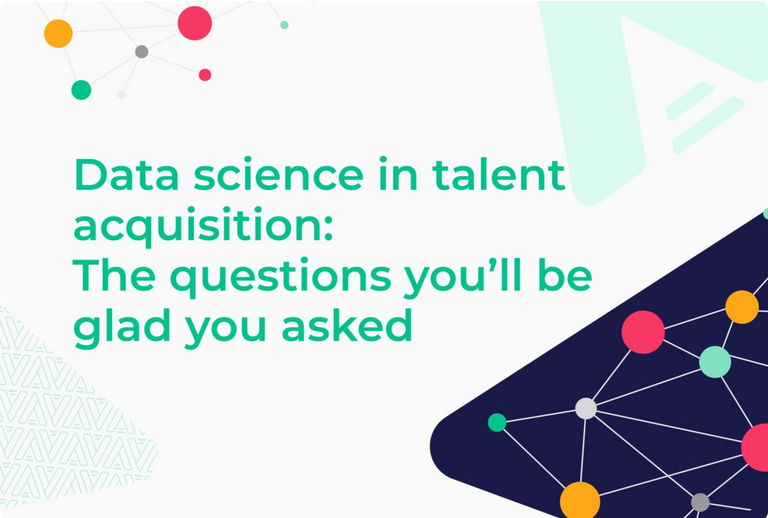 You meet someone at a party (remember those?), and they tell you they’re in data science. There’s a good chance you’ll be pretty impressed. After all, it’s an alien world for most of us.

But the fact is this: today, data is everywhere. Which means data science is playing an increasing role in all of our lives. Much of your online activity – whether it’s your Facebook taps, Google searches or purchase history – is being pulled apart and put back together with data science as we speak. It’s also at the heart of some exciting fields you’ve probably heard of, like AI and machine learning.

So it’s no surprise that data science has started making waves in the talent world. Properly applied, data science can be a force for good hiring. On the other hand, it’s also clear that not everyone trusts it, because it’s complicated. It can feel opaque.

But it doesn’t have to be! To help you gauge how suppliers (like us) use data to improve your hiring, here’s a list of five questions that’ll help you cut through any marketing sizzle, and get to that place of trust:

1. How do you validate the relationship between your data sets (e.g. certain skills with ‘good performers’)?

The relationships between data sets and work performance should, firstly, make sense. This is at the heart of the validity of any solution. Just quickly, validity generally refers to how accurately something measures what it’s intended to measure. So, just because data science is used, that doesn’t mean any relationships found can be justified or explained.

Remember: The best way to be sure if something is valid, is to ask for supporting research. Has this research been reviewed by a business psychologist? Don’t ever be afraid to grill anyone who says their solution relies on data science (including us).

2. How strong is the integrity of the data you collect?

The “integrity” of data can refer to two points: authenticity and privacy.

Firstly, any data that’s collected by a supplier should be a true, authentic reflection of someone’s responses – free of manipulation, or socially desirable answers. There are all sorts of ways that self-reported data (i.e. answers from the candidate, about the candidate) can become distorted. These can be both intentional and unintentional, so it’s important to establish this before you get started. This can also apply to any performance data a supplier collects or uses.

Then, it’s also important to make sure that any supplier handles their data with privacy in mind. Working with anonymised data limits the danger of misuse, and assures candidates that their personal information isn’t going out to other companies. It also means they can feel comfortable that their personal data won’t lead to discrimination or negatively affect them in any way.

3. Is the data you use completely truly representative of performance in the role?

The late, great airline pioneer (and all-round good guy) Herb Kelleher once said: “hire for attitude, train for skills”. Because he recognised that what you’ve done before isn’t a great predictor of how you’ll suit a new company.

As more and more companies prioritise culture and values over skills and experience, now’s the time to ask whether the traditional data – taken from the typical CV – actually predicts anything. As one of our customers found out soon after they came onboard with us, there’s no point hiring for skills (coding, in this case) if it’s behaviour that truly determines success.*

*If you’re interested in the specifics, it was really attention control that indicated likely job success in this case – not coding ability. And, as a result, a lot more women progressed to interview. Who would have known?

4. Could you explain what goes into your ‘matching score’ to a stranger on the street?

Be wary of any ‘matching score’ that’s described as “proprietary”, “top-secret”, or is otherwise kept under wraps. It could well be hiding something significant. That may be poor science, or poor data – so it’s important that anyone can look behind the curtain, and understand how candidates’ results really ladder up to their likely real-world ability or preferences.

5. How do you compare candidates’ data to the general population? How large is the comparison group, and how did you go about collecting their data? Is this group general, or specific to one sector?

Okay, we’ve cheated a bit here. But these bundled-up questions speak to the same point – the importance of grounding any candidate data in a wider, representative context. Here’s why that context matters:

Think of every personality trait as a spectrum. We all fall on that spectrum somewhere. Now, where we fall in that line, is relative to everyone else. We might think we’re highly outgoing, until we meet someone who actually is. So the context helps us establish the differences between people, and therefore see who will be the best fit for a specific role.

This isn’t a set of tick-box questions. It’s the start of a journey towards trust in a field that’s changing the way we work and live.

Our customers ask us these exact questions, because they know that what goes into any solution is just as important as what comes out. And that will only become more true, as data science’s impact continues to grow. In today’s world of talent acquisition, making the most of that impact is just a matter of asking the right questions.