New year, new you? The psychology of New Year’s resolutions 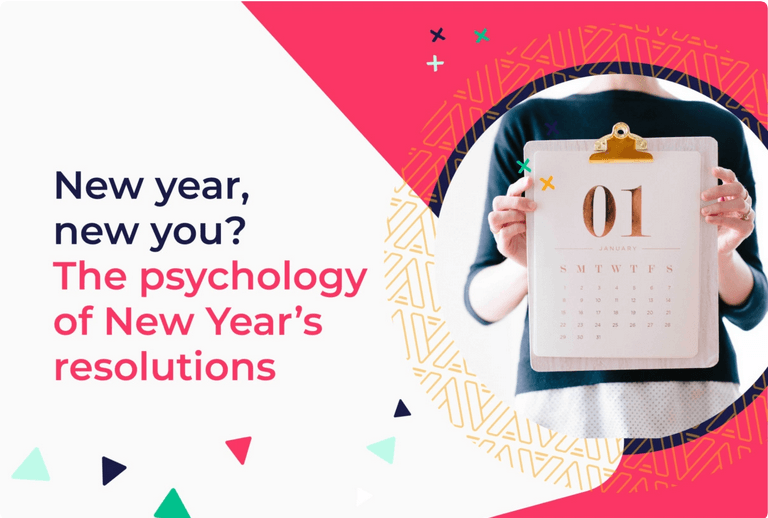 If you’ve ever made a New Year’s resolution, you know that making changes stick in our busy lives can be extremely challenging. Why do some people seem to change behaviours and adopt new habits more easily while others fall to the New Year’s resolution curse? In this post, we explore the psychology of New Year’s resolutions, how to make positive changes in your life and how to ensure you won’t have to make the same resolutions next year. Most people are aware of the bleak statistics surrounding New Year’s resolutions, yet the possibility of turning over a new leaf is so emotionally profound that we can’t resist year after year.

According to one source, 40% of people make New Year’s resolutions every year, however, only 19% of individuals report successfully achieving their goal. Although these may not be the best odds, there’s hope. The same study found that those who made resolutions were 10 times more likely to make a positive change to their lives after six months compared with those who wanted to make a change but did not make a New Year’s resolution. As such, making resolutions is worthwhile.

But how do you ensure success?

The main reason it’s so difficult to stick to a resolution is that the goal is not realistic. Individuals often fall prey to the ‘false hope syndrome’, believing that making a change will be easier or faster than it actually is. Behavioural psychologist Susan Weinschenk agrees. She explained in a 2017 Quartz article that, due to the way habits are formed, it is much more realistic to achieve small resolutions than big ones. Habit formation requires frequent and repeated action, so these new actions should be realistic to integrate into your daily routine and lifestyle.

A 2016 study published in the Personality and Social Psychology Bulletin revealed the most popular resolution by far, with over 55% of the individuals surveyed, is making health-related resolutions (exercise: 31.3%, eat healthy: 10.4%, have healthier habits: 13.5%). In second place, over 34% of individuals made work-related resolutions (save: 20.8%, get out of debt: 12.5%, get organized: 1.0%). These are extremely difficult and stressful goals to achieve in everyday life, let alone in a post-holiday slump. It is therefore not surprising that a whopping 80% of individuals fail to stick to their New Year’s resolutions for longer than six weeks.

The same study found that enjoyment, rather than importance, predicts long-term success. As enjoyment is directly linked to rewards, a good strategy is to break larger goals into milestones and to keep the momentum going by rewarding yourself for reaching each milestone. Similarly, accountability is another factor that can support your aim. Talk to friends and family about your resolution and your progress. Persistence is another important factor in achieving your resolution. Researchers found that a lapse in the resolution doesn’t have to be the end of it. Seventy-one percent of people who successfully stuck to their resolution slipped in the first month, according to research published in Psychology Today. The difference between those who kept their resolution and those who didn’t was not quitting after a slip-up. Instead, they re-committed themselves and, in many cases, doubled their efforts.

To summarise, making New Year’s resolutions can be a good first step towards making changes in your life. However, it is important to make these goals realistic and achievable in the set time frame. Make resolutions that you can keep, and make one change at a time to avoid getting overwhelmed. Keep up momentum by rewarding yourself at milestones, and don’t let slip-ups discourage you. Simply pick yourself up and keep striving after the goal.