The Science Behind Gamified Psychometric Assessments 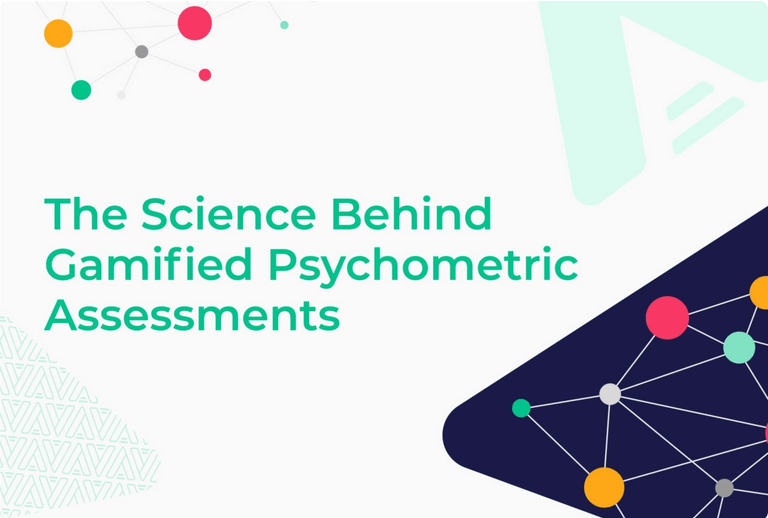 Gamification – the application of game technology in non-game contexts – has been quickly adopted as a go-to approach for enhancing engagement and innovation across industries –  recruitment is no exception! Gamified psychometric assessments can be used in the initial selection process and can extend to employee on-boarding and development.

It is important to understand the context in which this type of assessment has found its raison d’être. Gamification is not a type of assessment itself but rather a process whereby different elements within recruitment and development stages are adapted to mimic, include, or exploit game mechanics and elements. Gamification can come in the form of points, leaderboards, audio, and storylines.

Each of the game elements incorporated in our assessments tap into different psychological processes. It’s easy to see how gamification increases the user experience through engaging elements, encouraging competition, or providing a sense of achievement. While the academic literature is still playing catch-up with the applied use of gamification in selection, evidence is starting to show a clear pattern of beneficial effects. For example, game elements can trigger a sense of flow which encompasses a combination of interest, concentration and enjoyment typical of work tasks. When adequately sustained, flow unleashes one’s full potential, which is crucial for achieving peak performance, and, with that, showcasing competitive advantage. Core necessities for flow maintenance are clear goals, feedback, and the possibility of control – all of which are easily fostered via game elements such as leader boards, points, and interactive options respectively.

Two kinds of psychometric assessment fall under the gamification jurisdiction. In the simplest form of assessment gamification, traditional tests go through a makeover, placing the tasks in a more visually engaging format and adding game elements and features. For example, our aptitude assessments (pictured below) take this format. However,  there is more than meets the eye; the effect of the makeover is far more than just a cosmetic one. In addition to improving the user experience and employer brand perception, such assessments have shown some very important social implications. Comparing the same set of aptitude questions in their original and gamified versions demonstrated a significant reduction in the performance gap between women, non-white and lower socio-economic status individuals, and their male, white, privileged counterparts. While it has not yet been possible to isolate the cause of this,  two potential explanations are the reduction of stress and reduction of stereotype threat – both of which are currently being investigated experimentally by our research group. The opportunity to perform afforded to currently under-represented groups are another very good reason why gamification is a welcome addition to workplace selection.

Taking things to a much deeper level, the gamification shown in our psychometric assessments shifts the application of game elements and mechanics from the peripheral features of the assessment to its core, thereby harnessing the psychometric properties of games. The psychometric basis of the assessment and the game-like elements become a single unit, opening an unprecedented window on the test-taker’s patterns of decision-making, reactions, preferences, and biases. This is made possible by leveraging the accumulated evidence of several decades of advancements in cognitive, neuroscientific, and experimental psychology. Incorporating this kind of evidence into the status quo of psychological assessment is an uncharted territory that doesn’t come free of challenges.

First of all, most cognitive tasks were designed to understand human cognition as a whole – an endeavour in which individual differences are treated as confounds and kept to the unavoidable minimum. This requires harvesting the same data on an individual from different task sources to develop a stable and theoretically-sound model of individual differences, while identifying and filtering out construct-irrelevant noise.

Secondly, the average end-user (whether the Occupational Psychologist using the psychometric assessment, the client buying it, or the candidate completing it) may struggle to fully appreciate the link between button presses and personality traits. This is because the cognition-personality link has yet to make its full debut in mainstream psychology and, understandably, the mechanisms underlying the input-output relationship may appear more obscure than they are.

It is possible, for instance, to paint a rather accurate depiction of a person’s level of neuroticism by observing how positively or negatively they interpret neutral stimuli, or comparing their reaction times to these stimuli. Of course, there are many variables involved in any given score computation, and, often, the relationship between variables becomes too complex to explain in human language. But the bottom-line is that it’s possible to isolate construct-specific clusters of data and combine them in a way that is not only psychobiologically-sound, but also so far detached from what is feasibly within conscious control of the candidate that the assessment becomes completely resistant to distortion.

This means that whether a candidate lacks the necessary self-awareness to accurately rate themselves or whether they intentionally try to modify their response, the assessment remains unshaken. Stable on its cognitive foundations, it provides an accurate and objective assessment of the individual. Research has shown that, 89% of candidates prefer our gamified assessments in comparison to traditional measures, not just because of their engaging nature, but because they are fair and enable users to learn something about themselves.

Assessment gamification swings from being a test anxiety-defusing accessory for traditional measures, to being an enjoyable veneer for dry decade-old lab tasks, revolutionising the industry, it challenges with a fresh approach and strong psychometric rigour. As gamification in recruitment becomes more established, and the value of the type of the data that it can gather becomes truly recognised, its use cases will certainly grow beyond the occupational realm. We, at Arctic Shores, for one, are excited to see what the future of gamification holds.